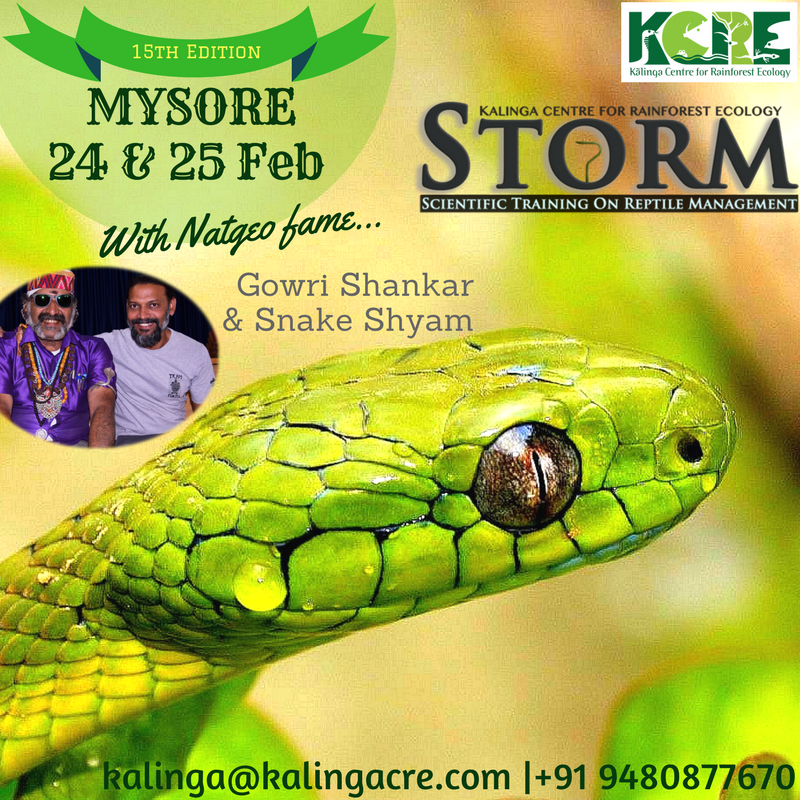 This event has ended

STORM – Scientific Training on Reptile Management, a pioneering initiative by the Kālinga Centre for
Rainforest Ecology is aimed at all those people who have taken the leap from abhorring reptiles to
understanding and learning to co-exist with them. Be it novice snake rescuers, students, enthusiasts
who would like to hone their knowledge or others who want to learn right and ethical methods of
handling them, this comprehensive bi-series workshop is an open door to learning about reptiles.
Note: Certificate of Participation will be given on completion of the workshop

What is this workshop about?
‘Snake wrangling’ has assumed a glamorized stead that leaves behind realities and ethics. And with more
people wanting to try their hand at it, they not only risk their own lives but endanger the lives of snakes
they supposedly ‘rescue’.
This workshop at Mysore in collaboration with ‘Snake Shyam’ introduces basics about reptiles,
identification methods of snakes, snake rescue protocols, equipment, legal issues and conservation
implications. The highlight is an opportunity to attend live snake rescue calls where participants practically
learn everything about rescue and relocation of snakes.

Who can attend?
Anybody over 18 yrs of age, who has a keen interest and passion to learn about snakes, snake rescuers who
would like to hone their skills, those who are considering herpetology as a career choice, and those who
want to get over their fear of snakes.

When & Where?
Assemble at 9:30 am
Brindavan Extn,
Near PK TB Hospital,
Mysore.

Itinerary:
We will be on call on both days i.e. whenever there is a rescue call the team will be on the move.
Day 1:
Discussion: Introduction to reptiles
Snake Taxonomy: Identification of snakes
through scale counts
Rescue techniques using professional equipments
On the move–snake rescue
Practical session: How not to rescue snakes

Who is conducting the workshop?

Gowri Shankar:
Gowri Shankar is a wildlife biologist working on king cobras for over a decade. He has worked at some
of the premier reptile conservation centres in India. He honed his skills in captive management of
snakes at the Madras Crocodile Bank Trust/ Centre for herpetology and has also authored several peer
reviewed papers. He was instrumental in initiating the pioneering radio telemetry study on king cobras
and was able to discover the secret life of king cobras. He is an authority on the ecology of king cobras
and has been featured in several wildlife documentaries like the ‘King and I’, ‘Secrets of the King Cobra
‘, ‘Asia’s Deadliest Snake’, and ‘Wildest India’ by BBC, National Geographic Channel, NatGeoWild ,
Discovery Channel ‘Mysteries of Wild India’ and ‘The Cobra King’ by channels like the BBC, Discovery,
NatGeo Wild, Animal Planet, Smithsonian and the National Geographic Channel . He is currently
registered as a PhD student at North Orissa University and former exchange student at Uppsala
University, Sweden.
More about Gowri at : http://pogirigowrishankar.wordpress.com/

Snake Shyam:
‘Snake Shyam’ , originally M.S. Balasubramaniam, is an integral part of Mysore’s herpetological scene.
He has been rescuing snakes since 1982 with an undeterred passion and deep concern for these
ophidians. With over 35,000 snakes recorded in his log book, his data and experience is a precious
treasure. He now has a terrarium to keep snakes till before their release every weekend. He was
featured in ‘Croc Chronicles: Snakes, Karma, Action ‘ on National Geographic and also has a street in
Mysore named after him. His flamboyant attire and his humility is a big win among young and old alike.
More about Snake Shyam at: http://en.wikipedia.org/wiki/Snake_Shyam

Does not include: Travel to/from Mysore, Travel during rescues, Food and Accommodation-
Advice on hotels can be provided on request. 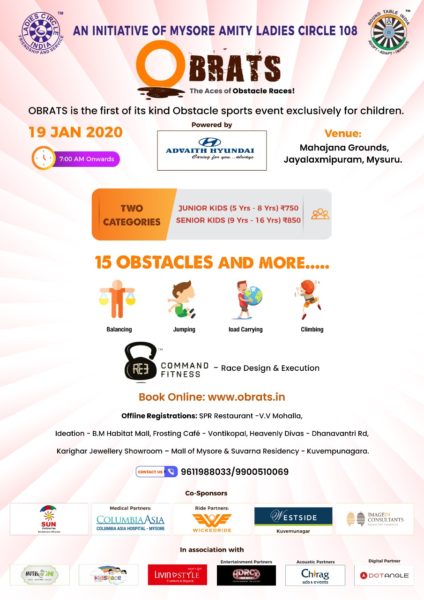 OBRATS – A sports event for children